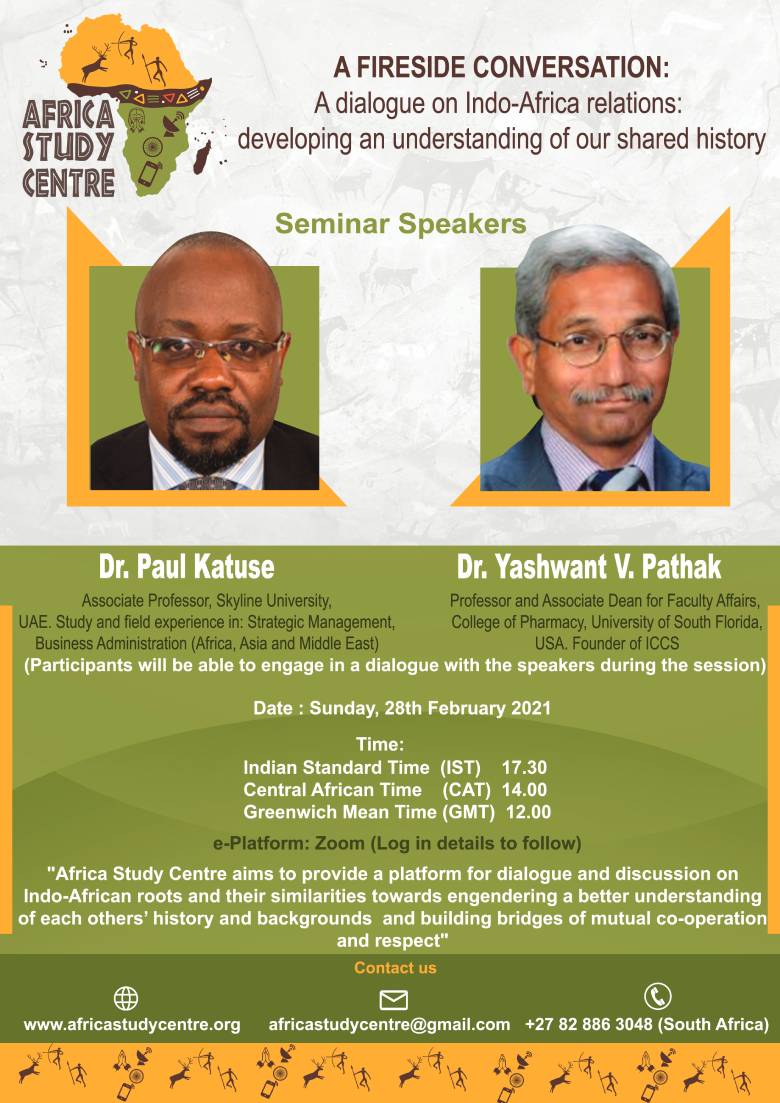 A dialogue on Indo-Africa Relations: developing an understanding of our shared history.

Synopsis of the views of the key speakers and forum: -

The word nation may have an immense meaning to humanity, but in the end, it is nothing more than us humans thriving together in a culture we developed through centuries.

From the time the first Neanderthal found the tools to make fire to the modern times where the global brains united to fight against common pandemic, humans have always pushed themselves to better their life. One can say that it is the lust for power or economic gains that drive the world but there is an inherit side benefit that somehow helps the society as a whole. When we talk about the early Indo-African interactions, it was established under Greek empire who for their own gain and sole purpose to rule the whole world may have initiated a series of violent and non-violent conquests but it did result in the Indo Africa interaction in the documented history. It is well known historical truth that the inhabitants of African continent came to Indian Sub-continent in and settled in some regions of Pakistan (Karachi, Sindh), Gujarat (Saurashtra), Hyderabad, Karnataka and Tamil Nadu. In the colonial period the Indo Afro interactions increased. Be it working for the British Empire as foot soldiers in the two devastating world wars or be it through the Indian labourers who were brought from India to Africa for construction work. In the 20th century when Indian subcontinent and African continent gained independence from their colonial powers the interaction between the two cultures expanded.

A singular paragraph appreciating “Mahatma Gandhi” for his role and beliefs in both Indian sub-continent and Africa does no justice, but at the same time needs no more glorifications. The great leaders Mahatma Gandhi and Nelson Mandela share the same line of thoughts and these thoughts were inspired not from their colonial powers but inherited by them from the ancient and deep-rooted culture.

The African Proverb “Until the Lions have their own historians, the History of The Hunt will always glorify The Hunter” is true to what the generations have read about the world history.

They might never read and understand the concept of “Akan – Moral System”, “Sanskaras” or “sacrament” but this is what makes the Afro Indo relation sacred and this is what makes them a civilisation who always taught the world about the “pursuit of peace” and “self rule”. Both cultures believe in the concept of working together to bring up the society from clutches of disease and poverty, and prosper together as one. The Africans in Swahili call it “Harambe” and in Zulu “Ubuntu” while Indians in Sanskrit call it “Dharnat Dharma Ityahuh.”

The coming together of nations of African Continent and India in the modern era is not by fluke; it was something that should have happened centuries ago. They share the same cultural beliefs and the way of life. For them religion is not about which God to worship but it is a way of life form them. The both believe in the concept of living ancestors and respect them for the wisdom they impart to the new generations through their life experiences. If we talk about languages, they speak then you could find a native African speaking “Punjabi”; similar to that you will find a Gujarati immigrant speaking “Tosa” and “Zulu”. The respect to local culture and traditions is what you find in the Afro Indo community. Nelson Mandela once said “If you talk to a man in a language he understands, that goes to his head. If you talk to him in his own language, that goes to his heart.” It is this understanding that allows the two cultures to amalgamate, and will allow a smooth collaboration for centuries to come.

On 22 July 2017, the Uhuru Kenyatta government announced that the Asian community would be officially recognised as the 44th tribe in Kenya recognising the community's contribution to Kenya from the dawn of the nation. This once again shows the way the dissidents of these two great nations have been working together as one spiritual culture that may have different perceptions of spirituality but can learn and together to pave the future of the world with the concept of Global Leadership through the concept of “Harambe” and “Ubuntu”